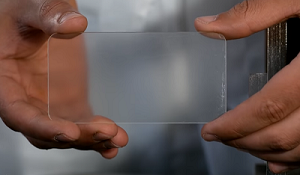 When I first came to work at ACerS in 2018, a growing topic in the electronics world was foldable smartphones.

“Foldable” in this case did not mean your early 2000s flip phones, where the phone consisted of a rigid screen on top and a keyboard on bottom. No, foldable phones in this case meant a phone with a single screen that bends.

Phone companies began announcing their plans to debut foldable smartphones at the end of 2018, and I wrote a CTT post highlighting a few of the challenges they would face in bringing such phones to market. And now that several of these phones have hit the market, some of the predictions came true—particularly difficulties with developing a bendable but tough cover screen...